"I Wanted to Prevent War" – Georg Elser and the November 8, 1939 Bürgerbräukeller Bombing 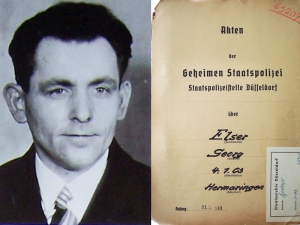 On November 8, 1938, carpenter Georg Elser attempted to assassinate Adolf Hitler in the Munich Bürgerbräukeller. He knew that Hitler would give a speech there on the anniversary of the 1923 Beer Hall Putsch. Elser was able to get access to the event venue. For nights on end, he installed an explosive device there. As Hitler, contrary to expectations, left the hall shortly before the explosion, he survived the assassination attempt.

The same evening, Georg Elser was arrested in Konstanz. He confessed after long hours of interrogation. For five years, Elser was kept in total isolation in Sachsenhausen concentration camp. On April 9, 1945, only weeks before Nazi Germany‘s surrender, Elser was shot dead in Dachau concentration camp. After 1945, legends and lies distorted the view on Georg Elser. His image only started to change when his Gestapo interrogation minutes were released in 1970.

The exhibition opening is on Sunday, January 26, 2020, at 4 pm on the occasion of International Holocaust Remembrance Day. Mr. Josef Seibold from the Georg Elser Gedenkstätte Königsbronn (Königsbronn Georg Elser Memorial Site https://www.georg-elser-gedenkstaette.de/) will give an introduction to the exhibition.