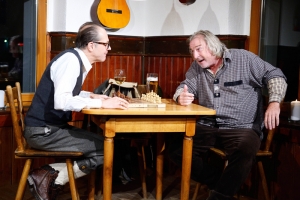 On October 9, 2019, the Theater Lindenhof (https://www.theater-lindenhof.de/) will perform its play “Chaim & Adolf: Eine Begegnung im Gasthaus” (Chaim & Adolf: A Meeting in a Tavern) in the Rexingen sports club. This play is not performed in theaters but in taverns. The stage directions say, “There have to be 1 sausage salad, 4 beers, and 1 wheat beer as well as additional glasses.” This should not be a problem in the Rexingen clubhouse; the theatergoers can look forward to food and service as well.

“Chaim & Adolf” is a chamber drama with a double bottom, a play full of wit, verve, and depth. Chaim Eisenberg, an Israeli with German roots, annually returns to the same Swabian village, the same tavern in order to go hiking. He is lacking something in this countryside idyll, though: a suitable chess partner. Bu the tavern keeper knows someone: Adolf, a farmer. Hesitant at first because of Adolf’s name, Chaim eventually does get involved in a chess game. It turns out that Adolf is an intelligent, quick-witted, and humorous partner. While playing, a conversation about their personal family histories unfolds. Is there more that connects the two than just their love for chess?